Sometimes, when the night is quietest, I will lay on Chico. My head listening to his breath, his heartbeat in my ear. I pet him. I feel another new lump, he turns 10 soon, and I think about life without him. Sometimes, loneliness abounds. I don’t mind it entirely. All emotions have purpose. Often, in the expanse of the world, I am mostly saddened about how little I get to experience. It’s all of history, not just the next century, but the next epoch. Everything seems too magical about life, it is hard to imagine not seeing it to some sort of end, but maybe that is the catch to it all. We hope there is no end. We want life to perpetuate, ageless, beyond the eras and into the eons.

I have such an immense love for life, beyond the biological, from before the Hadean to beyond the Holocene, from Planck, primordial, to present and into the a time when the stars all begin to fade and the universe goes dark. Sometimes I think all of existence is a fraction of a moment, one burst in the universe like a child blowing a soapy bubble exploding out, the big bang, and that inside the bubble's burst, a jiffy, the time it takes light to travel one fermi, the size of a nucleon, a light-foot, a nanosecond, in that explosion is every galaxy expanding, stars forming, black holes, elements condensing to planets, tectonic plates, water, life, plants, dinosaurs, humans, wars, religions, politicians, petty hate and greedy money, and love, all the love, and the water falls to the ground, the bubble dissipates and the whole thing is over, in that one burst of a bubble, and we are watching it so amazingly slow that we can’t fathom how short it all really is. Gone. Like that. All of imaginable life isn’t the actual bubble, but the brief explosion of the bubble; and here I am, in some fraction of existence when compared to stratification of rocks, of condensing of planets, of supernovae stars, and expanding galaxies, and what I get is me, and my dog, curled up fretting about not having each other. This moment I matter to this dog, but it is all just a bubble, a bang, a yoctosecond, one septillionth of a second, and all we think is so important is gone. We are not even an inhale of breath on a clock of eons.

I nudge Chico awake, ask him if he wants to go for a walk; his eyes expand out to the whites, his eyelids disappearing into black holes, he jumps to his feat, shakes off the slumber and we walk out into the stars. 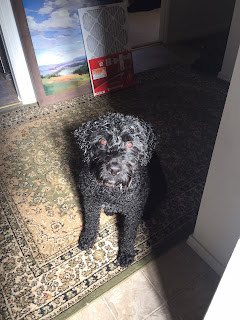 Posted by Sisyphusinlove at 11:02 AM