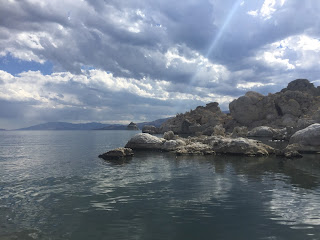 Today, walking along the shores of Pyramid Lake, itself the remnants of ancient Lake Lahontan, a lake that once covered most of Nevada, I have been thinking of Orpheus and the song he played after the death of his wife that made the gods weep. The tufa rock formations surrounding Pyramid Lake are limestone gravestones to the water that once was. I am always seeking such muses, lost love, unrequited love, new love, and sometimes just plain old lust.


The other day a new roommate moved into the house, a young biologist seeking work in the world. After almost 7 years in a relationship, she is out in the present moment and trying to find footing in the world as she hikes trails across the Sierra. The new energy in the house intoxicates.

On our monthly adventure, Markus and I drove out to Nevada, met up along the dark shores of the lake, camped in our vehicles like we have before on our surfing trips, and awoke to the sunrise out over the Lake Range Mountains, the calm lake interrupted only by early morning fishermen there for the opening of the cutthroat trout. 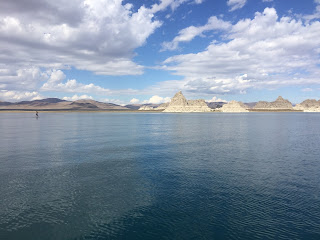 We are slow to rise in the morning, eat breakfast, and get out onto the lake. A storm is coming, texture is growing on the lake, but we launch our boards and try to paddle a bit before the wind comes up. We start to head north, paddling past fishermen on ladders casting to the cutthroat. In the distance, the tufa formation call to us—sirens in the wind as dark clouds loom behind the western Virginia Mountains. We paddle towards them anyways. They don’t seem too far, but they call to us. 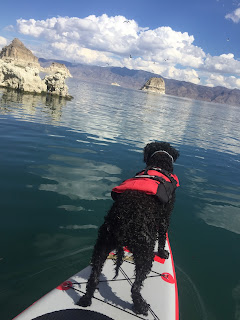 A tree ascended there. Oh pure transcendence!
Oh Orpheus sings! Oh tall tree in the ear!
And all the things hushed. Yes even in that silence
a new beginning, beckoning, change appeared.

Chico is quick to cuddle up with the new person in the house. He nudges her door open after I leave for work and crawls up into her bed. His cries of loneliness hushed by the warm body in the bed, the belly rubs—he snores again.

Tufa rock formations beacon in the lake, they are created by bubbling springs releasing carbonate materials and meeting the calcium in the water. When the first humans at the end of the Pleistocene epoch, as glaciers retreated off the North American continent, migrated across the new land, the ancestors to the Paiute natives must have found the ebbing Lake Lahontan a paradise of life.

Markus and I paddle towards the tufa. It is a sacred area and we are not supposed to get close, along with being spiritual, it is a nesting ground for white pelicans. We paddle close to the tufa and everything feels like the ocean. Tufa look like exposed coral reefs with seabirds nesting.  We notice a bubbling hot spring steaming into the cool breeze. We know it is off limits, but we are drawn closer to it. I think of Orpheus trying to play his lyre louder than the Sirens singing as the Argonauts try to pass the rocky Sirenum scopuli. 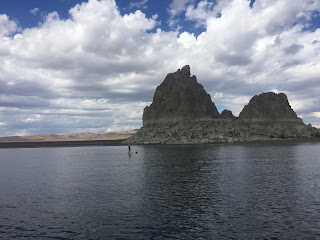 There is darkness in lust. There is consumption and confusion. Ships are drawn to destruction by the beauty of sound, by the drowning desire of beauty.

Creatures of stillness crowded from the bright
unbound forest, out of their lairs and nests;
and it was not from any dullness, not
from fear, that they were so quiet in themselves,

Orpheus was said to sing such a sad song that he was able to walk into hell, soften the heart of Hades, certainly Persephone could not deny such love and sorrow of song. Persephone pulled into the underworld during the winter months; if anyone could understand the sorrow of loss it was she. When Hades released Eurydice to Orpheus he was told not to look back, but he did. Don’t look back. Move forward. My mantra. 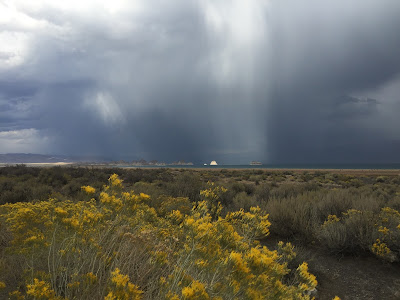 I find myself looking back to love often. The future is too often muddied by the past. New legs, new touches, new eyes, and in them is a remembrance of what once was. The coming fall is in the air, the leaves turn, and Persephone begins the long walk back to Hades. Old smiles, old kisses, the longing for something that never will be again. How does anyone love for so long and then love no more and then love again? How do you play such sad songs and then play something happy again? How can we see the bits of spring even in the fall? 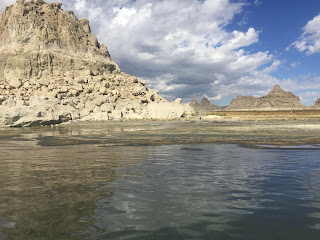 We paddle closer to the hot springs, but the dark clouds come down, and just as we are about to land on shore to explore the hot springs, lightning thunders down across the sage brush plains to the north. We duck our heads a bit and look to the sky. The sky has answered. We debate crashing our boats into the beauty, reckless existence for the sake of beauty and exploration. And me too, I can imagine diving into the depths of Hades for such beauty.

But from just listening. Bellow, roar, shriek
Seemed small inside their hearts. And where there had been
At most a makeshift hut to receive the music,

And I walk around the house at times, glimpses of legs, caught staring too long, the sirens pulling towards destruction. And so I run, I run into the wilderness of my own mind to find music stronger than the song of beauty. I plead for Orpheus to play so loud my own desire is lost in the intonations of lightning and thunder.

We turn and start to paddle back, but the clouds drop down on us, the thunder roars above us, and we get close to shore, look for anything from which to hide behind. The only structures in miles are tufa. We head to shore instead, lift our boards to our heads and run for cover. Rain streaks the purpling lake. In the tufa is patience I don’t know or understand. I want beauty now, lust now, safety now, the whole lake devoured into my mind, her eyes lost in the churned wind. We hike through the brambles and rabbit brush towards the road and to safety, but we look back to the beaconing tufa towers calling to us. We choose safety over destruction. I choose to retreat rather than delve into beauty. Even in this, I look back.

A shelter nailed up out of their darkest longing,
With an entryway that shuddered in the wind-
You built a temple deep inside their hearing.
Rilke

We reach the road, hitchhike back to our trucks, and fall asleep to the sound of the rain.  In the morning, I wake at sunrise and walk down to the shores, Chico running along side. We sit in the post storm desert, the land satiated, the rabbit brush yellow flowers wave in the morning breeze, the song of lightning, the song of destruction, Orpheus’ song a hummed memory in my mind. The geese and cormorants air their feathers to the morning sun. I can feel the ocean in this place as if the tide is pulling, as if the moon is in want of this water. Here is the sediment of time; here is patience. When the song is over, what do we do? When we lay there in the silence of the bed, in the darkness of a song as memory, what do we do? How does the world love after such sorrow? 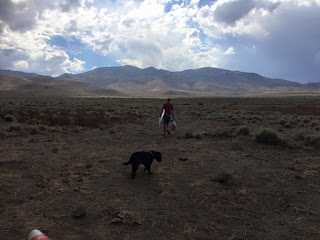 There are many different versions of how Orpheus died. The most brutal came at the hands of women who loved him unrequitedly. They tore his body apart and threw him into the river where his head continued to sing such sad songs. As in all Greek myths and parables, I wonder who I am in this story: Eurydice, Persephone, or Orpheus. I am most curious how the lyre, floating down the river, reverberations of a life that loved and lost, of joy and sadness, sinking to depths, is risen up into the stars. We load up our gear and go our different ways to head back home. The music still plays, the dark longing still present. 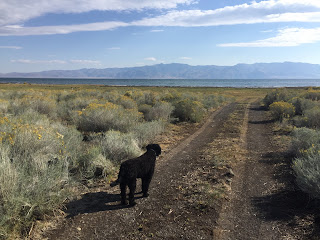 Posted by Sisyphusinlove at 2:22 PM No comments: