Walking my dog under streetlights—this night—

the last of the leaves sleep on the asphalt,

papers after too much downpour.  Clouds clear

to a cold night sky through the now

bare boughs, both the streetlamps and starlight shine

in hope’s space, even as temperatures fall.

The Last Moments with George W.

Tonight, at the end of 8 lingering years, we celebrate along the line of bricks demarcating what was once West and East Berlin at the Brandenburg Gate.  There are too many other places where lines have been drawn in such ways.  The shivered air ignites with colored light, rockets curve to explosion, smoke lingers in the warm air inversion created by fire and people, and every where we funnel through crowds in the sulfuric air.  We travel the haunt of real bombs, real rockets, and the once scorched soil.  Very little, including the trees in the parceled forests between villages, have more than 60 years of life—repatriation and retribution. 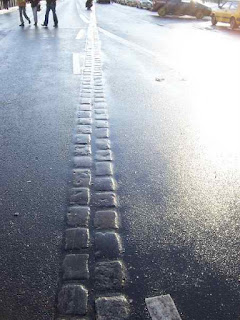 Next to the Reichstag, the finale of fireworks appears to encroach into my eyes as the crowd moves into ecstasy.  It is raining shredded paper and ash.  Every small village and city we visit speaks about what remained after the years of bombing as if by grace something still stood.  Is it easier to speak about the remains rather than the losses?  When we hiked in the Taunus everywhere stood groves of monocultured trees planted after defeat and in hope.  In Germany, they used to line streets and paths with Birch trees with white bark; a crescent moon could still shine a path; and in remnants, like everything after war, a few still stand along the roads and paths in the countryside.  Perhaps nobody knows everything that was lost, and that is lost, during times of war.  My mind is on the Middle East.  I don’t claim to know what is fair, not amongst people fighting ideologies.  I look to the land, even in the places we call deserts we destroy with artillery and shells—bombs melt sand into glass parabolas reflecting back up to the sky.

In the first hours of this New Year, we walk under the lit Linden trees in ankle deep trash; a small group huddles near a fire that burns the remains of cardboard firecrackers and bottle rocket sticks.  We pass all the museums, some new, some patched, and the bombed out church kept, not as some artist’s rendition, not a representation, not to signify, but to haunt the night skyline, to loom.  Earlier, in an antique store in a Turkish district of Berlin we bought a beer stein made in West Germany, and purchased a cane adorned with medals from the places that a person once visited in the Harz Mountains, all of them come from the East, and only the East.  Where there was no wall, one side poured strips of white sand to see, and shoot, deserters trying to flee to the other side.  In the Jewish History Museum it strikes me how they stress that every person killed in Auschwitz or Dachau, whether by disease, starvation, gas or bullet, were murdered.

The throngs of party-goers herd towards the U-bahn.  The news said over one million people were in the streets celebrating—still not more than those murdered, pushed onto trains, forced into labor with just enough calories to stay alive.  No memorials, no plaques, no museums, no monuments stand anywhere for Hitler; his body burned, supposedly cremated and cast into the river as a covert mission just for the purpose to avoid martyrdom.  His place in history relegated to pure evil, and yet I can’t help but see him, looking out the window to Eva sunbathing naked, smoking cigarettes, reading a magazine he banned from everyone else in his country.  Did he think he owned her like he did this land?  Who doesn’t want a sane death, not cyanide and gunshots, not bombs and gasses?

In Gaza, as the US has and does, Israel proclaims war on Hamas, a terrorist group of people without country launching rockets into the land they want.  Is it the land they love, or the people they hate?  From here, in Germany, a town where hundreds of thousands of Jews were murdered, I watch the scant news reports of deaths in Gaza.  Israel accepts the collateral damage as a means to peace.  I don’t know if Hitler ever dreamed of peaceful times.  As he watched Eva bite down on the cyanide capsule, perhaps he held on long enough to watch her collapse to the ground, look peaceful in the way her breath slowed down, maybe she dreamed for a few seconds.  Can we allow him to love her?  The bullet through Hitler’s right temple must have kept all those dreams, the fear of nightmares, away from him. I can’t sympathize with him, only hate the model the world keeps following—death, death, and more death.  And when we can’t kill them, and sometimes I even wish they were all dead, though I am not sure who they are, we build walls.  All the religions, ideologies, beliefs, governments slaughter, the blood, growing ever more toxic, pours into the storm drains eventually washing out to sea.  How can you not see it, feel it—mourn. 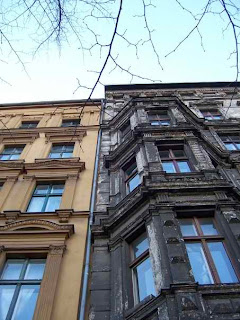 What is worth anything—not gold, not oil, not numbers on a computer, not notes of promise because none of it can we eat or drink.  They have no real purpose, and those things have value only because we allot that to them.  I can’t imagine that we will ever redistribute land to the small family farmer.
As Erin and I fall off to sleep to a New Year, the sounds of bombs going off all night keep waking us, even after the morning light slides into the window in the fourth floor flat we rented above the U-bahn.  All night, I wake with each blast, and remember that people on both sides of Berlin (we are sleeping in the East) celebrate with explosions and light.  It seems very strange.

Posted by Sisyphusinlove at 1:05 PM